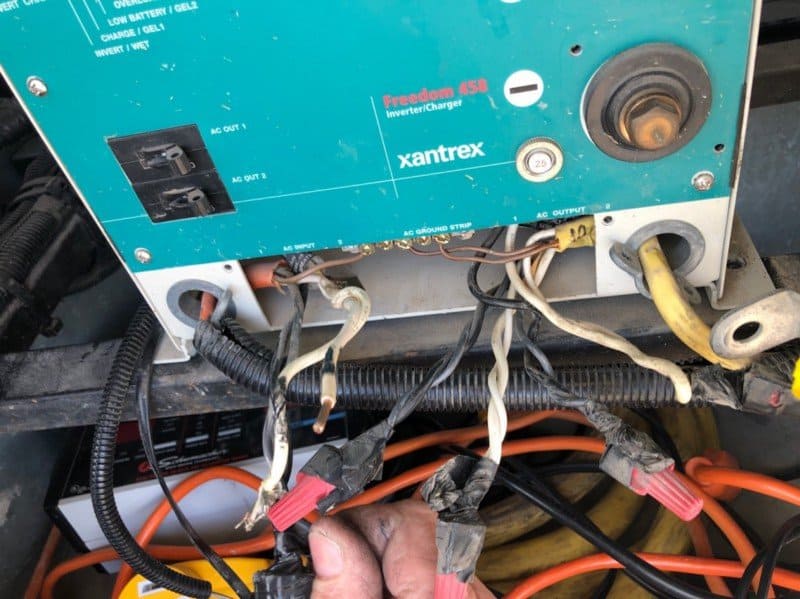 It started on a strange May evening in the Sonoran desert.

I guess I should explain what “strange” means in a place where 20+ feet cacti grow like trees in a forest.

Strange means rain. And with the rain came wind and lightning.

I hunkered down inside with a few documentaries on YouTube I’d seen around a dozen times and waited for it to pass. The power went out briefly, but it came right back on. That’s not a strange occurrence when you live on the edge of civilization, so I thought nothing of it.

Thankful for the rain, I went to sleep. The next morning, I stumbled into the living area as usual. Bleary-eyed and pre-coffee, I tried to put the awnings out before the searing sun came up over the Rincón mountains. They wouldn’t go out, and an amber-colored “on” light blinked as if it were taunting me.

Definitely not awake yet, I consulted Google. Moisture in the wind sensor they said. Let it dry out, they said. I took the free advice from the internet and went about my day.

Later that afternoon, I noticed it was getting stuffy in the RV. “Doesn’t the air usually kick on by now?” I thought. I checked the thermostat and it read 82. The air conditioner was turned on, and it was set to 75. Why hadn’t it come on?

I’m plugged in to shore power, the breakers are fine, and the control panel says everything has power. What gives?

This led to a wild series of texts, photos, fuse checking and troubleshooting with my mechanically-inclined significant other. Who was across the country at the time, of course.

From there, it turned into a raging avalanche of problems. The refrigerator controls started flashing LO DC, and the bedroom lights refused to work.

The conclusion we came to was that the power outage the night before killed our 13-year-old inverter/charger.

Crap. I’m a computer nerd, not an electrician. Anything more advanced than checking fuses leaves me out of my depth.

We decided it was time to bring in the experts, and placed a call to a mobile RV service we’d seen frequently. They couldn’t come right away, but offered up a generous tip to keep our RV limping by until they could take a look.

Put a car battery charger on the inputs between the batteries and the inverter. Your refrigerator and air conditioning controls require 12 volts for operation. Once the voltage drops below 10, they won’t work.

Not wanting to lose every scrap of food in the refrigerator, I raced outside to find our Walmart special car battery charger. I threw it on the inverter inputs and waited for help to come.

It came the next evening in the form of the most colorful RV repair experts I’ve ever had the pleasure of meeting.

Ken and his business partner Rachel of Cameron’s Reliable RV Maintenance rolled up in a mobile repair shop that would make Bob Vila jealous. They took a gander at the inverter/charger, fiddled with some controls in and outside my RV, and confirmed our suspicions.

Sweetheart, your inverter is fucked.

This was followed with a hilarious tirade on how horrible the brand of inverter/charger was and how dumb the manufacturer of our RV was to engineer things they way they did.

Ken knew his stuff, and somehow managed to curse more than I do. Which is impressive. But the cursing was never in anger. Rather, just to describe things.

That amused the hell out of me, and being amused was a welcome thing after being scared and frustrated for a few days.

I had a rough repair cost estimate within minutes. Once we knew what we were in for, we decided to replace our trashed batteries as well. We’d planned on using AGM batteries, but the cost of the inverter replacement stretched our budget. 💸

We opted for standard lead acid batteries with a semi-automatic water fill system. Ken ordered the parts, and after a week of us squeaking by with a car battery charger hooked to our RV, he was back to install our new inverter/charger.

It took about two hours, during which we laughed a lot at quips from Ken on the “fucking sexy wire” inside our old inverter/charger.

We now have a pure sine inverter/charger. Our electronics are happier, and we’ll be able to boondock more efficiently. Also, we expect our electric bill to be lower as we’re no longer constantly trying to charge crap batteries.

The new controls are easy to use. We have a more accurate description of the system’s performance, and the display clearly indicates what stage of charging we’re in. No more guessing with idiot lights.

Other than a monthly 5-minute battery top off procedure, we don’t worry about power anymore.

It was a frustrating, scary, and costly experience. But with planning, a “roll with the punches” attitude, and a call to the world’s funniest RV repair service, we survived.