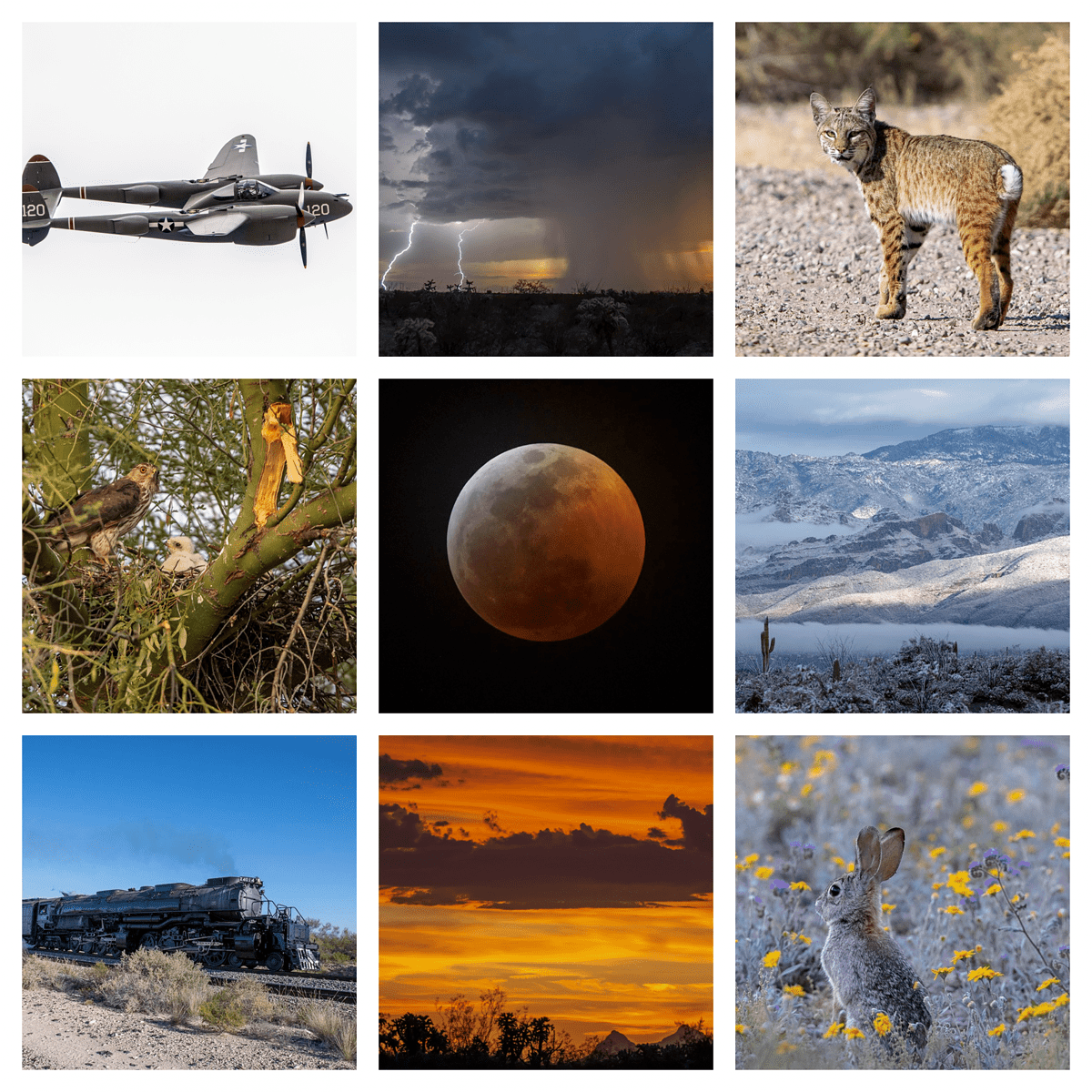 As our second year of full-time RV living in Tucson comes to an end, we are getting a bit of time to slow down, relax, and gear up for another trip around the sun.

We thought it would be fun to take a look back at the photos we’ve shot over the previous 12 months and tell the stories behind the moments.

2019 was a fun year, and it was definitely difficult to keep the list short. Here’s a few photos that stood out to us and some details behind each image.

The new year in Tucson was started by a very rare sight. Everything was covered in snow. We took a trip to Saguaro National Park East to take a peek at something that seems to only happen once every decade.

We expected the park to be closed, and were delighted to find out that it was business as usual despite the unusual fluffy frosting.

As we exited the park, we were treated with the opportunity to capture this image of Mt. Lemmon covered in snow from head to foot.

We found ourselves wondering what the wildlife in the higher elevations thought of the uncommon weather and headed to the Whitewater Draw near Wilcox, AZ.

What we found was a bucket of mud and a cloud of fog covering the area we had previously known to be be clear and relatively dry. It was eerily quiet with the exception of the thousands of Sandhill Cranes.

It didn’t seem like it was real. It was a challenging day for photography, but it was amazing to experience. Even though the mud was pulling the shoes off our feet!

January wasn’t done yet. A full lunar eclipse was another treat we were able to observe.

Luckily for us overcast and cloudy weather is not common, so we also got the chance to take in this eclipse with our camera in hand.

As the earth blocked the sun, the “blood moon” appeared to be red. This was a picture captured before totality. Watching the visible light change before our eyes was spectacular.

History in the Skies

As the seasons change, so do the birds. Near the end of winter the Tucson skies are active with historical and modern aircraft that take part in practice Heritage Flights.

This is the place where pilots come to prepare for the upcoming air show season. It’s one of my favorite events, and watching these aircraft and their skilled operators never gets old.

It only gets more amazing as I learn more. The Lockheed P-38 AKA the”fork-tailed devil” is one of only 10 airworthy examples that exist.

Spring in the Sonoran Desert is incredible. Many people hear “desert” and think it’s nothing but lifeless sand.

While I didn’t get to spend a lot of time here during the spring (gotta work, and work pays the bills) we did stumble upon this cute bunny enjoying the fresh foliage.

We always hope for winter rain because it brings beautiful spring wildflowers.

And just like that, summer happens. Every season is alive and exciting, but summer holds a special place for us.

Snowbirds are gone, everyone thinks we’re going to die from heat exhaustion, and the place is assumed to be dead.

It couldn’t be more opposite. The desert is just waking up, and it’s nothing short of magical. I hope the following pictures speak for themselves.

Then came our annual Monsoon. Lightning. Downpours. Earth shaking thunder. Lifesource water. The SMELL… Oh my God the SMELL. The smell of a freshly wet creosote bush is something that can not be duplicated.

The storms pop up rapidly and dissipate just as quick. It’s a wonderful change of pace from the seemingly endless weeks of gloomy weather from the Midwest.

Even on a stormy day, sunshine is normal. It’s actually what cooks up the storms.

There’s Life in the Desert

After the storms, the wildlife seems even happier than the humans. This Cooper’s Hawk and her baby were loving it. Not pictured, but in the nest are two other chicks. They grew up so fast!

This Colorado River Toad was chilling under our car. After a good soak, he was ready to relax and potentially kill a dog. For real. These guys are toxic. Don’t let Fido lick one.

As summer winds down, everything is green and full of life. Pictured above, San Xavier Mission rests in the same spot as it has since 1692.

It has endured some rough history, but looks beautiful among the surrounding landscape.

Big Boy #4014 cruises by as fall encroaches on the area. The only operational and largest steam engine plowed through Tucson in mid October. We were able to avoid crowds by finding some state trust land near the tracks.

Closer to Thanksgiving, we got the chance to see this wild Bobcat (and what we assume to be its siblings) at Sweetwater Wildlife Preserve.

This beautiful cat kept a close eye on us as we walked around the park, but luckily posed for a quick shot.

Wrapping up the year (so far) is this beautiful Marsh Hawk. We decided to end the year as it had started by going to the Whitewater Draw again.

This trip was much drier on the surface, but the recent rains had expanded the flooded areas significantly. Because of this there wasn’t nearly as many birds nearby, but it was still a fantastic experience.

As we approach our 3rd year in Tucson, we still haven’t been able to see all that she has to offer. The Old Pueblo is a special place, and one that won’t be taken for granted.